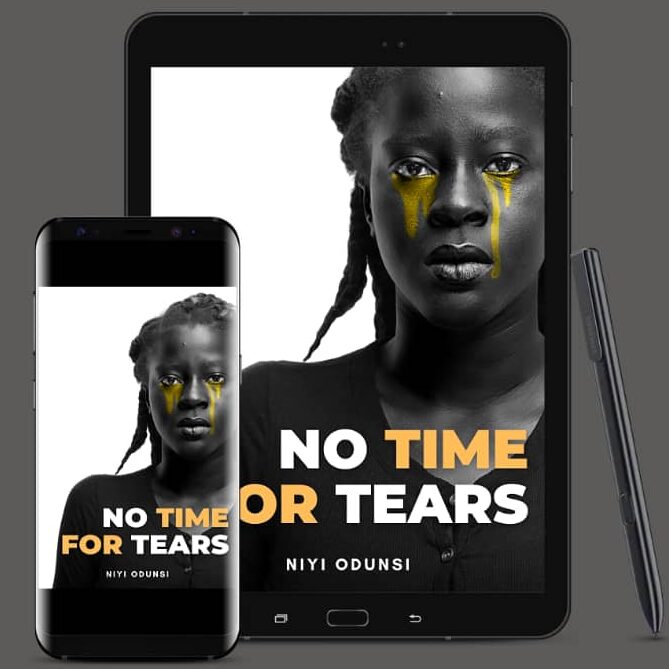 NO TIME FOR TEARS

✅ Discover how to avoid broken homes and disastrous marriages.

✅ Discover the secret to successful abstinence from premarital sex.

✅ Learn how to live a life that inspires others to become that great woman or man that God created them to be.

HERE'S WHAT PEOPLE ARE SAYING ABOUT "NO TIME FOR TEARS"

I read NTFT and couldn't stop the flow of tears till I made a personal commitment to God afresh.

On reading No Time for Tears by Niyi Odunsi, I was able to break out from the webs of my past, which held me from becoming what God wanted me to be. Today ,I am on my way to becoming the man God wants me to be. I duly endorse this book.

This fiction novel teaches you practical ways to:

✅ Succeed in your love relationships

✅ Break out of toxic relationships.

Who should read this novel?

✅ This novel is for Teenagers, Young Adults, Singles, Married folks and Parents.

Here's what more people are saying about the Best Seller, "NO TIME FOR TEARS" 👇:

The first time I read No Time for Tears, I was in Junior School, JSS 3 to be precise. That was a long time ago. Since then the book has been dear to my heart. I knew there was something special about the book and so I had a longing to read it again. Thank you for the amazing book, I thoroughly enjoyed reading it again. You're a mentor to young writers and I'll love to learn so much for you as a young writer.

Niyi has a great Literary mind! His novel " No time for Tears" brings alive the yesteryears of young people and undergraduates. I am superbly impressed with the blending of the past with the present in the Novel. He was able to achieve this blending seamlessly. Kudos!!!

I recommend No Time for Tears by Niyi. It's revealing, consoling and mediating. It provides young people with a vehement solution to a life of revelance, impact and success.

It was 7pm when Ade Smith reduced the speed of his black, Mercedes Benz saloon car until he was crawling. He was some ten meters from the narrow bridge when he stopped completely.

His mind was a maze. At 35, he’d been out of a job for almost two years and
there was no hope of finding one anytime soon. Without a job, he wasn’t able to provide for his family and his pride was gone. He was a Yoruba man and among the Yorubas, a man was a man because he provided for his family!

Even though no one, except his wife, ever said anything, Ade knew what
people thought of him. A lazy, irresponsible fellow, feeding off his wife! He
could see it in their eyes, everywhere he went, even strangers who didn’t know anything about him.

Ade was tired. His once loving and devoted wife had become a bitch! She
was now rude, insubordinate and hateful. Ade had developed the habit of
leaving home in the mornings and returning late, just to avoid her constant nagging.

He had been taking some medication to help with his bouts of depression but now the drugs had become ineffective. He had complained about dark thoughts of suicide to his Physician and the man had recommended
counseling. He didn’t trust the Physician any more. Of course the fellow wouldn’t say anything but Ade could tell that the fellow had no respect whatsoever for him too. It was the eyes, he could always tell from their eyes.

They all looked at him as if he were a lesser man.
In any case, Ade had about had as much as he could take. He definitely
wasn’t going to confide in a total stranger, another stuffy nosed Doctor
prying down at him through disdain coloured lenses!

He fixed his gaze on the deep abyss between the Bridge and the Lagoon
beneath. As he revved the engine of his old but faithful friend, the only
regret he had was his daughter.

The rays of the sun woke Anne up. Eyes opened, she looked round the room and smiled. It was nice to beback home, in her room. The walls were covered with brilliant flowery pink and white wall-papers. A lighter shade of pink curtains hung over three huge
windows in the room. She was proud of the potted plants arranged neatly by the windows.

She loved in-door plants and spent quite some time tending them whenevershe was home. The plants looked good. They were always moved every morning from the lounge to the balcony where the gardener could have access to them anytime she was at school.

Stretching lazily on the bed, in her white and pink nightgown, she yawned
and ran her hand through her not-so-tidy hair. She didn’t feel like getting up,
even though it was about eight O’clock in the morning.

There was a scratching sound by her door. That would be Rupert, her dog,
trying to come into the room. He had gone off on a frolic of his own the
previous night.

Anne dragged herself up. She stretched and caught her reflection on the full-
length mirror by the door of the room. Pausing, she looked at her light
skinned, five feet two inch frame. As always, she wondered if she wasn’t too
skinny. She scored herself average as far as good looks were concerned. She peered closely at her face in the mirror. She was satisfied with her clear, smooth skin.

If only these lips were smaller, she thought out aloud. The scratching sound was becoming desperate. If she didn’t open the door soon, Rupert would leave ugly marks on it. Her father wouldn’t like that for sure.

As soon as she opened the door, Rupert jumped up and tried to lick Anne’s
face. He was a big Doberman, almost five years old.

As she sat on the bed, Anne stroked his black and brown fur gently. She had missed Rupert while in high school for the past three months. Thank God, the term had ended. The facilities in the school were deteriorated so badly that living in a primitive village would have been more comfortable.

Niyi Odunsi, is a veteran Fiction writer, and the celebrated author of the Best seller novel "No Time for Tears".

The Novel ''No Time for Tears'' was written to help:

Teenagers, Singles, Couples and Parents make the right choices in life and in love relationships.

Over the years, the Novel has been a great blessing to everyone that read it.

This E-book was created to allow more people have access to this life changing message packed in a Novel.

TAKE MY MONEY, AND GIVE ME THE BOOK!